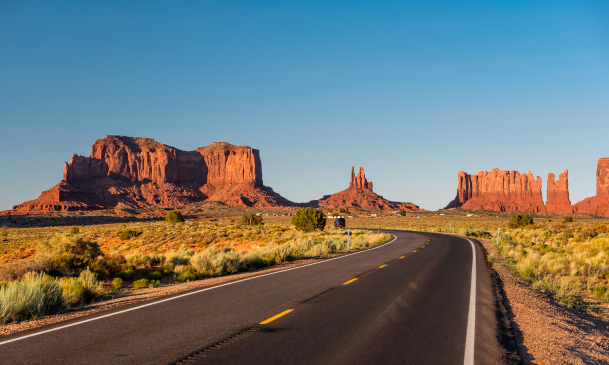 Sweeping Sonoran Desert vistas and one of the world's seven natural wonders await campers looking to vacation in Arizona. The Copper State is home to the Grand Canyon, the world's longest canyon, as well as 22 national parks and monuments for adventure-seekers to uncover. Arizona also has a diverse culture, with around 1/4th of the state designated as Native American reservations. And its position along the Mexican border means there's a unique mix of Latin American culture as well.

Travel down to Southern Arizona and explore major cities like Tucson and state capital Phoenix. Or, point your RV towards Northern Arizona and swing by Flagstaff on your way to Grand Canyon National Park. With several exciting cities and a stunning landscape, it's easy to see why over 46 million people visit Arizona every year.

If you're searching for somewhere to escape the gloomy winter weather back home, Arizona is ideal, with around 300 days of sunshine a year, making it the sunniest state in the US. The best time to book an RV rental in Arizona is in the spring when temperatures are pleasant, desert wildflowers are in bloom, and you can make the most of the state's epic wilderness. You'll also have the opportunity to catch events like Scottsdale Culinary Festival and McDowell Mountain Music Festival. Discover the best of the Sun Belt and take your crew on a desert drive with a camper rental in Arizona. 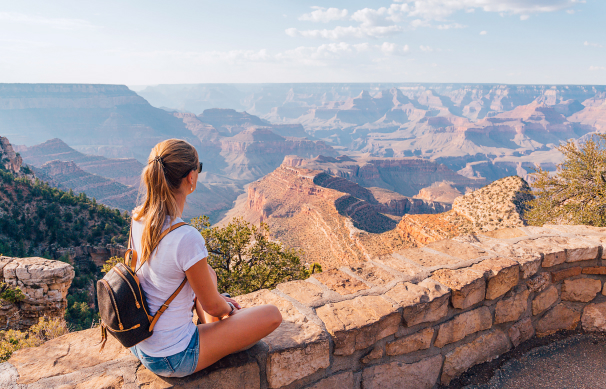 Best of The Outdoors in Arizona

Arizona is wonderful for stepping off the beaten path with mile after mile of arid desert and dozens of state and national parks. One of the main reasons tourists flock to Arizona each year is to explore the majestic Grand Canyon National Park. Home to the 277-mile-long Grand Canyon, this national park is the second most popular in the US, with around 6 million visitors each year. Take in one of the most extraordinary natural views in North America and book a mule ride down the Grand Canyon's South or North Rim for the ultimate outdoor adventure. With so much to see, there's no doubt you'll want to spend the night at the Grand Canyon. You can find two rural year-round campgrounds with basic amenities in the park, as well as Trailer Village RV Park in Grand Canyon Village, which provides full hookups. Flagstaff is also only 80 miles away if you fancy a day trip instead.

If you're looking to see what else Arizona's vast countryside has to offer, pay a visit to Petrified Forest National Park. Situated to the east of Flagstaff, this national park features vibrant badlands and grasslands uniquely colored by deposits of petrified woodlands. Hiking is the top activity in this park, with trails that weave between mesas and past the ruins of pueblos that date back over 700 years. If you're camping with your canine companion, bring them along to Petrified Forest National Park for a much-needed stroll. Campers searching for somewhere to spend the night nearby should head to Holbrook. Holbrook is a small city just 20 minutes away, offering a few well-equipped campgrounds like Holbrook/ Petrified Forest KOA.

One of the best ways to experience the Sonoran Desert is to visit Saguaro National Park. This park is named after the iconic 40-foot-tall saguaro cacti, which are native to Southern Arizona. Plan a hike through the park to see these famous cacti and enjoy views of the Rincon Mountains in the backdrop. Bring along your binoculars to spot some of the rare bird species that inhabit the region, including great horned owls, greater roadrunners, and vermilion flycatchers. Saguaro National Park is just 20 minutes from Tucson and some of the best campgrounds in Arizona, like Sentinel Peak RV Park and Tucson/ Lazydays KOA. 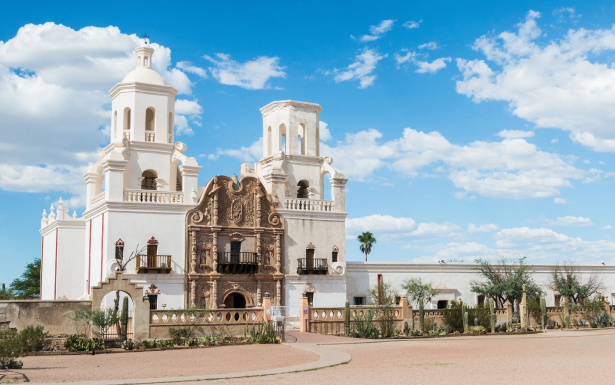 Best Things to Do in Arizona

Once you pick up your Arizona motorhome rental, you'll be ready for the ultimate road trip. As a fairly sparsely populated state, Arizona is great for escaping civilization and is pretty easy to get around in an oversized RV. I-10 and I-17 connect major metro areas like Tucson, Phoenix, and Flagstaff, while many of the state's top parks are just a stone's throw from these cities.

Phoenix is the perfect base for families, with excellent attractions for all ages like the Phoenix Zoo. The largest privately-owned zoo in the country, Phoenix Zoo is home to over 400 species from around the world, including Asian elephants, Bornean orangutans, and Komodo dragons. With lots of on-site parking and downtown less than 10 miles away, you won't have any trouble finding somewhere to park your RV during your visit.

Alternatively, travel further south to Tucson and learn about Arizona's Latin history. San Xavier del Bac Mission is among the most important historical buildings in Arizona. Dating back to the late 18th century, it is the oldest intact European building in the state and one of the best examples of Spanish colonial architecture in the US. Over 200,000 people stop by the mission each year to admire its intricate architecture and pay their respects. San Xavier del Bac Mission is just 9 miles south of downtown Tucson and several modern campgrounds.

Fancy stepping back in time to the Wild West? Drive out to Yuma. Nestled in the southwestern corner of Arizona, Yuma is famous for its association with westerns like 3:10 to Yuma and the infamous Yuma Territorial Prison. Yuma is just three hours from Phoenix, making it the perfect distance for an overnight road trip. Ensure you pay a visit to Yuma Territorial Prison Park and take a tour of this remarkable turn-of-the-century prison.

How much does it cost to rent an RV near Grand Canyon National Park?

Motorhomes around Grand Canyon National Park average $200/night while towable trailers are around $120/night. Most RV owners offer weekly and monthly discounts between 10 and 20%.