RV Rentals in Indianapolis, IN 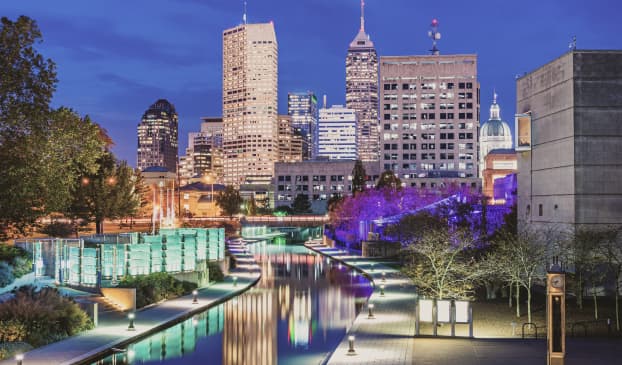 There are few better cities for a family getaway than Indianapolis. Indiana's capital city is home to several world-class family-friendly attractions, like the world's largest children's museum and the world's largest sports venue, the Indianapolis Motor Speedway. Naptown is a hidden gem for cuisine, with many foodies ranking Indy as one of the most underrated food cities in the US. Indianapolis also has just as many cultural delights as its Midwest neighbors, with some of the best museums in the region, including Newfields and the Eiteljorg Museum.

The best time to book an RV rental in Indianapolis is during the summer when the weather is at its warmest, and you can attend top events like the Indianapolis 500 and the Indiana State Fair. Whether you're traveling with kids in your crew or just fancy a weekend at the races, there's nowhere quite like Indianapolis.

Level up your next road trip by staying at one of the best campgrounds in Indianapolis. One top-rated RV park close to downtown is the Lake Haven Retreat. Only 7 miles from the heart of Indianapolis, Lake Haven Retreat offers gravel sites with full hookups that allow 30/50 amp electricity. Despite its central location this campground is surprisingly peaceful, and there's even an onsite five-acre pond where you can spend your days boating and fishing. Useful amenities around camp include laundry facilities, free WiFi, and showers.

Another popular campground in a tranquil setting not far from the city is the Indianapolis KOA. Located 15 miles east of Indy in Greenfield, this KOA offers creekside campsites surrounded by woodlands. Each gravel site comes with full hookups and 30/50 amp electricity. You won't be bored during your stay, with tons of onsite fun, including a mini-water park, banana bike rentals, and wagon rides. Pets are welcome, and there's an onsite dog park to keep your pup entertained. Amenities here are standard and include WiFi, showers, and a laundry room.

Prefer to stay away from the bright lights of the big city? Consider camping at the White River Campground. Nestled along the White River 30 miles north of Naptown, the White River Campground provides waterfront sites with full hookups that supply 50 amp electricity. Thanks to its position within rural Hamilton County, this RV park is ideal for getting outdoors. Take a kayak out on the river, plan a woodland walk, or grab dinner with the crew. The camp also provides some basic amenities like showers and restrooms.

Things to Do in Indianapolis

Once you've found the perfect spot to park your Indianapolis motorhome rental, you'll no doubt be itching to explore the city. Traffic in Indianapolis can be bumper to bumper but doesn't tend to be as bad as other major Midwestern cities like Chicago. There are also several places downtown where you can park an RV for the day, including the Indianapolis Zoo and White River State Park. If you don't feel confident bringing your RV into Naptown, park on the outskirts and use the IndyGo bus service to take a tour.

Plan the perfect day-out for the kid campers in your crew with a trip to The Children's Museum of Indianapolis. The world's largest children's museum features dozens of exciting and interactive exhibits spread across five floors. Walk with dinosaurs in the Dinosphere, blast off into outer space at Beyond Spaceship Earth, and step inside an Ancient Egyptian tomb at the Treasures of the Earth.

Alternatively, swing by the Indianapolis Motor Speedway for a day at the races. This renowned racetrack hosts many of the biggest events on the racing calendar, including the world-famous Indy 500. Watch a race, grab some merch at the gift shop, and then head to the Indianapolis Motor Speedway Museum to learn the history of this prestigious track.

Indiana boasts some beautiful countryside, and campers looking for a break from the big city should point their RV rental towards Fort Harrison State Park. With over 1,700 acres of picturesque woodlands to explore, Fort Harrison State Park is among the best hiking and biking areas near Indy. The park also offers fishing and boating opportunities on Fall Creek, and there's no better spot for sledding during the winter. History buffs will want to check out the Museum of 20th Century Warfare, with exhibits about the old 20th century Fort Harrison.

How much does it cost to rent an RV in Indianapolis, IN?

Motorhomes in Indianapolis, IN average $200/night while towable trailers are around $120/night. Most RV owners offer weekly and monthly discounts between 10 and 20%.

Most owners offer either unlimited mi or very generous daily limits. The included mileage and extras appear on your booking estimate before you put in your booking request.