RV Rentals in Portland, OR 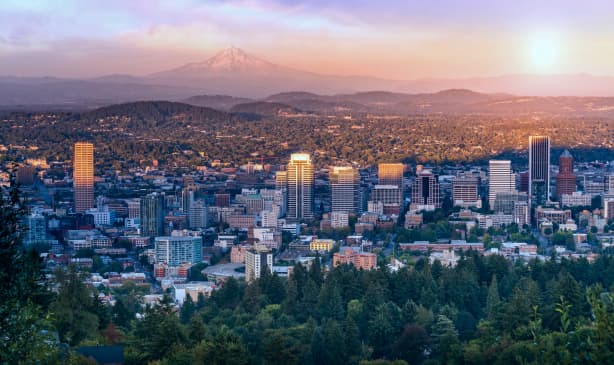 Portland is a big city with a laid-back, outdoorsy vibe. The city celebrates its love of food, art, culture, community, and it’s famous slogan to “Keep Portland Weird.” Although Portland is Oregon’s largest city by population, the welcoming atmosphere and small-town feeling brings locals and visitors together as if they were long-lost friends. Whether you pack up the campervan and head for the coast or spend time chilling near the city, there’s no better way to explore Portland than in a camper rental.

The best time to visit Portland is from June through September, when there are fewer chances of rain and temperatures rarely top 80 degrees. The city is enjoyable during the summer months because of events that lure people outdoors, like the Portland Rose Festival or the Portland Saturday Market.

Things to Do in Portland

Spending time outdoors in Portland is easy, fun, and most of the time, free. Portland is home to 275 public parks and gardens and 350 miles of bikeways. During the summer months, several area parks turn on their interactive fountains and splash pads. The larger parks have both public spaces and cultural institutions. A few of the popular stops inside of Washington Park include the Oregon Zoo, Portland Japanese Garden, and International Rose Test Garden. Tom McCall Waterfront Park houses the Japanese American Historical Plaza and the Oregon Maritime Museum. On weekends from March through December, Waterfront Park hosts the Portland Saturday Market, the largest arts-and-crafts fair in the US.

In Portland, the food truck scene takes mobile restaurants to a new level. Food carts group together in pods and stay in one location. Pod locations are easy to locate since the city publishes information online. Food carts not your thing for breakfast? The original Voodoo Doughnut is a staple in Old Town Portland, and the doughnuts are delightful. The gooey fried sweet dough treats are so delicious; it’s not uncommon to see a line down the street or people carrying around the distinctive pink box. With so many carry-out options, you can have dinner back at the RV and spend your time in the campground and not the kitchen.

Sampling food all day is bound to make you hungry. The only thing Portland does better than food is craft beer and wine. Portland’s craft beer scene is bubbling. The city has close to 75 craft breweries and hosts Portland Beer Week and multiple beer festivals each year. Sign up for a brewery tour and hop from one tasting to the next, or try the best suds in the city for free. Many of Portland’s breweries and distilleries have complimentary tours and tastings. Are you a wine connoisseur? The vineyards in the Willamette Valley produce most of Oregon’s wine. You can get to some of the best wineries in Willamette Wine Country in under an hour from Portland. There is so much to see and sample, you might want to stay for more than a day. Willamette Wine Country RV Park is a convenient location that makes it easy for you to park your Portland motorhome rental close to all the grapes.

Pheasant Ridge RV Resort is a full-service campground with an onsite laundromat, grocery store, and propane filling station. The tree-lined park is clean and spacious, and all of the sites have electricity, water, and sewer. The resort is a short drive from downtown Portland and the popular outdoor space, Tryon Creek State Natural Area. Portland encourages everyone to take public transportation; you can ride a bus from a park-and-ride station that’s just minutes away from Pheasant Ridge and help support Portland’s clean-air efforts.

Columbia River RV Park is located along the scenic Columbia River. Every site has full hookups and a paved driveway. Depending on your RV’s length and features, you can choose either a back-in or pull-through site. The park is pet-friendly and features an off-leash dog run. The park is just 10 miles from downtown Portland and across the bridge from Vancouver, Washington. The nearest public transit station is less than a mile from the campground.

How much does it cost to rent an RV in Portland, OR?

Motorhomes in Portland, OR average $200/night while towable trailers are around $120/night. Most RV owners offer weekly and monthly discounts between 10 and 20%.

Most owners offer either unlimited mi or very generous daily limits. The included mileage and extras appear on your booking estimate before you put in your booking request.